Something that is common to Scotland and Denmark is a love for sarcasm/irony (I always get these terms mixed up, possibly because so many other people are mixing them up – what I mean is saying the opposite of what is meant, without any explicit clues that this is the case). I know that Austrians do it, too, but I’ve also noticed that people from East Germany, the USA and Japan (and France according to Phyllis) don’t have a clue. I tried to find something about this on Google, but to no avail. Surely somebody must have made a world map of sarcasm? 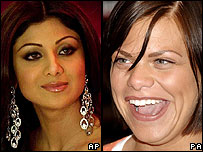 The recent uproar about racism in Celebrity Big Brother is fascinating. While the British are generally regarded as very tolerant, it’s quite clear to anybody who’s lived here for a while that that isn’t the whole story. They are very inhibited about complaining out loud, and they tend to moan about people behind their backs instead of telling them up front what they dislike. Some foreigners possibly never notice this moaning, and they thus assume British people are tolerant, which is possibly why some people in India were so shocked about what happened.

It’s also interesting to notice the reaction to this – while Indian people might have been shocked by the realisation that British people aren’t always nice, people in this country seem to have been more shocked by the fact that it was broadcast, and many have suggested taking Big Brother off air, rather than doing anything to tackle the underlying xenophobia.