The SNP are often asked to provide detailed plans for what to do after independence — which currency would Scotland use, would there be passport controls, would Scotland be a member of NATO, etc.

To a certain extent that is right and proper – the SNP is the main proponent of independence, so it reasonable to expect that this party will also be able to suggest some answers to these questions.

However, there’s a limit to it.

Furthermore, the next elections to the Scottish Parliament are due in May 2016, roughly 18 months after the independence referendum. It is entirely possible that the SNP won’t win these elections, and it could therefore quite feasibly be a Labour politician who would be the first prime minister of an independent Scotland, and in this case it would be Labour and not the SNP that would be making many of the crucial decisions about NATO, the currency and the other crucial questions.

In short, I’d like the Unionists to acknowledge that they too need to have a vision about what an independent Scotland should look like, because they might be the ones who’ll have to implement it. 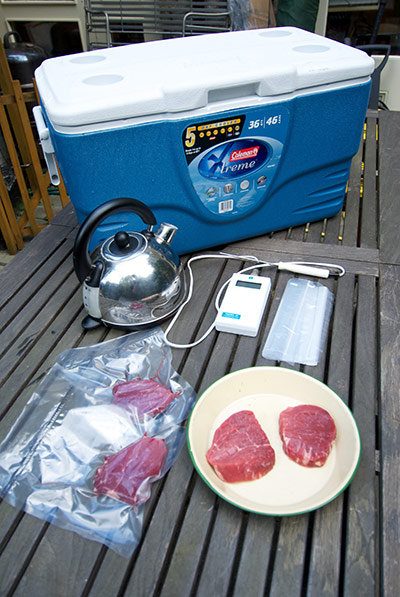 I’ve been wanting to try sous-vide cooking for a while now, but the cost of the proper equipment has been putting me off.

However, the Guardian has now published a really helpful series of photos that shows how to do DIY sous-vide cooking.

Basically, I just just need my insulated mash tun and some poly bags from Ikea, and my steaks will always be perfect. Tavish Scott and some of his unionist friends have been having fun recently suggesting that Shetland and Orkney might separate from Scotland in the case of Scottish independence.

As far as I can see, there are theoretically four options for Shetland and Orkney if Scotland becomes independent:

Option (1) is of course the most straightforward option. Although option (2) would perhaps tempt some of the islanders temporarily, I’m not sure they’d really want to learn Norwegian as their first foreign language, introduce Norwegian law, go to university in Norway, and so on. Option (3) would possibly appeal to some of the islanders, especially those of them who have moved there from England; however, would the majority of the population really want to be flown to England for complex hospital treatments, or by default go to university in England? Also, the islands have never in their history belonged to England, so it’d be a somewhat strange outcome. Option (4) is of course a possibility, but they have a very small population and don’t even have experience with devolution.

I think it’s a good idea for Shetland and Orkney to get some degree of autonomy within Scotland. Perhaps this would over time develop into full independence, although I’m doubtful. However, to leap from being a full and integrated part of Scotland to becoming an independent nation overnight would be a complete shock to the system, and I’d be very surprised if the islanders themselves would go for it, especially as there is no established independence movement on the islands as far as I know.

I can therefore only conclude that Tavish Scott is just trying to spread uncertainty and fear about the prospects of Scottish independence – he’s not really advocating separating the islands from mainland Scotland. I would have hoped the unionists had some positive arguments in favour of the Union, but that might have been too much to hope for. Two weeks ago, the Better Nation blog contained a posting by Jeff Breslin which contained the following passage:

Perhaps the saddest aspect of Ireland’s current difficulties is the number of bright young things leaving the country for better prospects abroad. One could argue that this isn’t a road that Scotland would want to go down through independence and, yet, that is precisely what is happening now. (I know this from experience as I moved to London strictly because Scotland couldn’t provide the PhD that my partner wished to study. Wales, incidentally, could).

There is clearly only one stagnant, problem child in the above list and that is because there is an historic, corrosive brain drain taking place in Scotland that is damaging growth from both a population and an economic viewpoint. It is little wonder that ‘London-based parties’, to use an unfortunate phrase, are championing the continuation of the UK when it is London that is the prime beneficiary of this very brain drain.

I decided to have a closer look at this. Using figures from Wikipedia (look for the articles called Demographics of …), I’ve made two graphs.

The first one (top right) shows the populations of Scotland, Ireland, Denmark and Norway from 1900 to 2010. In 1900, Scotland was by far the most populous country of the four, with almost as big a population as Norway and Denmark combined. Scotland and Ireland had almost stagnant populations for the following decades, while Norway and Denmark grew rapidly. A while after Ireland became independent, the Irish population suddenly exploded, and it has now almost caught up with Denmark. Scotland seems to have experienced modest growth after the introduction of the Scottish Parliament in 1999. The other graph (on the left) adds Sweden and England, but instead of using absolute numbers, the graphs are relative to the populations in 1900.

The second graph clearly shows a difference between non-independent Scotland and pre-independence Ireland on one hand, and the independent countries (or the dominant part of the union, in the case of England) on the other.

If Scotland had experienced the same relative population growth as Denmark since the year 1900, the population in 2010 would have been around 10.1m instead of 5.2m. Would this have happened if Scotland had regained her independence under Queen Victoria, or are there other reasons why Scotland would never have been as fertile as Denmark?