We noticed that a potato plant had started growing out of an opening in our composter (or our dalek, as we prefer to call it).

When I dug it out, it had grown only one new potato, but it was probably the weirdest-looking spud I had ever seen.

It clearly had a face, as can be seen on the photo, but it didn’t look anything like Jesus, as you would have expected from all the media stories about people seeing him in their toast or Ikea’s toilet.

It most closely resembled a troll, so I must conclude it was a Jesus troll.

We had it for dinner yesterday. During our stay in Devon, we went on a daytrip to the Eden Project near St. Austell in Cornwall.

It’s supposed to be one of the UK’s main tourist attractions, and most visitors did look very happy.

I thought it was an eery place, however.

Basically, it’s supposed to be “a living theatre of plants”, and its “mission is to tell the world the story of plants that changed history”.

I guess it does that very well (although there seems to be an emphasis on plants used in herbal medicine), but it also achieves it literally: There are no animals!

Compare it to the delightful Randers Regnskov in Denmark, and the difference couldn’t be greater.

Randers Regnskov is teeming with life, but Eden’s huge greenhouses are strangely quiet – no insects, no birds, nothing.

To me, it breaks the illusion completely: No matter how well they reconstruct a Mediterranean landscape, an indivisible part of that consists of the background noices made by the animals. How can you believe even for a second that you’re in a rainforest if nothing’s moving and the fruit is rotting away uneaten on the branches of the trees?

To be fair, the place is not completely dead. There are plenty of Cornish ants, and I also spotted a robin next to their banana plantation, but that just made the absence of tropical fauna even more painful.

I wonder how they keep the place so barren. Not only are there no animals, but I didn’t see many weeds, either, and in a tropical climate you’d expect every square millimetre to be overgrown within a fortnight.

I think I hated the place so much because it was so stunning. The greenhouses (or biomes, as they call them) are enormous and full of the most amazing plants.

If they handed over the site to the people behind Randers Regnskov, it could become a true Eden. 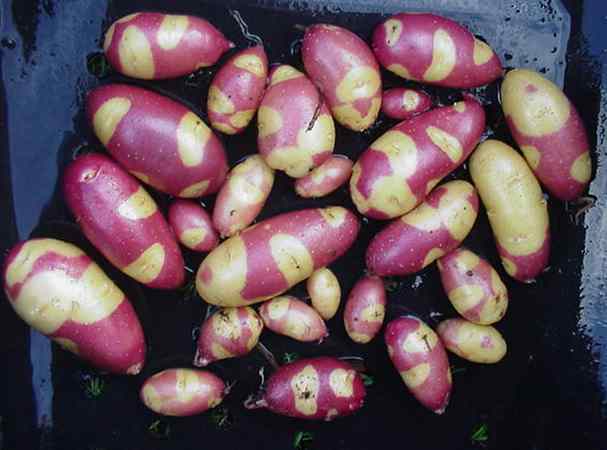 What with daffodils and crocuses appearing in the garden, I guess it’ll soon be time to decide what to grow this year.

Last year Phyllis was quite upset that I forgot to grow potatoes, and my life was only saved by a few plants that appeared out of nowhere (or rather, I must have left a few tubers in the ground the year before).

So this year is to become the year of the home-grown potatoes.

However, which varieties should we grow?

It’d be nice to grow something that you don’t often see in shops, such as these Mayan potatoes. When we bought our house two years ago, we started planting a lot of stuff and generally doing up the garden.

One of the first trees we planted was a crab apple of the cultivar John Downie, which we chose because it was said to be the best crab apple for making jellies.

Alas, it also turned out to be very susceptible to apple scab, and although we could to some extent control it with an antifungal spray, it was clearly spending all its strength fighting off the disease instead of producing apples, so I have now removed it.

I was surprised by its lack of root when I pulled it up – the poor thing clearly didn’t even have enough resources to send out roots!

Anyway, we now need a new crab apple tree, and preferable one that is as resistant to apple scab as possible.

I don’t think any fully resistant trees are available in the UK, so I’m thinking about either a Red Sentinel or a Pink Glow, or perhaps an Evereste.

Can anybody here recommend one? This year I had time to order seeds from the Heritage Seed Library.

I got various tomatoes and other stuff for the greenhouse, and then some peas called Lancashire Lad.

I didn’t know much about them, but they’re growing really well, much better than the peas we bought in B&Q.

And today they got their first flowers, and they’re beautiful (click on the photo for a better view).